Nevada Lithium Corporation sees the ancient caldera in northwest Humboldt County as a rich source of profits from a proposed open pit lithium mine. Ranchers, sportsmen and conservation groups see the water, beauty and wildlife values of the Montana Mountains into which the Thacker Pass Lithium Mine footprint may intrude …

Lead Story: The Destruction of the Sacred

There’s a very serious lack of legal protection for Native American sacred lands. For example, the Native American Religious Freedom Act is narrowly interpreted by the courts; so long as an action is not forcing Native people from doing something against their religion, then their religious freedom is not being affected despite the loss of a cultural area…

The Bureau of Land Management (BLM) defines “treatment (of mine sites) in perpetuity” as 500 years or greater; in other words, no end in sight. This is what Newmont Mining Corporation is ef- fectively proposing for acid mine drainage from the Phoenix Mine, located southwest of Battle Mountain. For Nevadans, a proposal in which waste requires perpetual treatment conjures up the multigen- erational nuclear waste dump proposal for Yucca Mountain….

When we wrote this, small advances were being made in North Dakota to protect land sacred to the Standing Rock Sioux tribe and the waters of the Missouri River from the Dakota Access Pipeline. In Michigan, the Menominee Tribe is currently finding few means to save the waters of the Menominee River, burial sites and other tribal legacies from a proposed mine project which could ultimately affect the Great Lakes.  …

According to state of Nevada pumping data1 the mining industry is the second largest water user in the state, behind agriculture and ahead of municipal and quasi-municipal users….

Lead Story:  Taking on the Industry in the Courts thanks to Roger Flynn

Perhaps you have wondered how Great Basin Resource Watch with its small budget can take on the mining industry in federal courts. The answer is: Roger Flynn and the organization he founded, Western Mining Action Project (WMAP)…

In the Summer 2011 and Spring 2012 issues of Bristlecone, we featured stories about the mining project initiated by Comstock Mining, Inc. (CMI) in Lyon and Storey Counties….

The Mt. Hope Molybdenum Mine project would be one of the largest new mines that Nevada has seen for many years, moving roughly 60 million tons of rock annually…

The cultural impact to the Western Shoshone from the Cortez Hills mine is so severe that in 2008 GBRW decided to “pull out the stops” to prevent Barrick Gold Corporation from developing this large open pit mine at Mt. Denabo…

December 29, 2020:   Comments on the Thacker Pass Lithium Mine Project – Final EIS and Proposed Record of Decision,

September 15, 2020: Scoping comments on Notice of Intent To Prepare an Environmental Impact Statement for the Proposed Gibellini Mine Project, Eureka, NV

May 26, 2020: renewal and major modification of a Water Pollution Control Permit (WPCP) for the Rochester Mine Project

February 27, 2020:  Scoping comments on the proposed Thacker Pass Lithium Mine and  Exploration Plan of Operations and Reclamation Plan to prepare and Environmental Impact Statement.

April 5, 2019: Scoping comments on the Notice to Prepare an Environmental Impact Statement for a modification to a Plan of Operations (POA11) submitted by Coeur Rochester Inc., Pershing County, NV

May 31, 2018: Supplemental Comments on the Environmental Assessment for the Cortez Refractory Ore Amendment to the Plan of Operations

May 25, 2018:  Comments on the Major Modification of the Water Pollution Control Permit NEV87061, Fortitude/Reona (Phoenix) Project

May 24, 2018: Comments on the Environmental Assessment for the Cortez Refractory Ore Amendment to the Plan of Operations

January 17, 2018:  Letter to the Nevada Division of Environmental Protection, Bureau of Mining Regulation and Reclamation regarding the Phoenix Mine Expansion.

May 27, 2021. Media Release:   Conservation and Public Accountability Groups Ask Court to Block Construction of the Thacker Pass Lithium Mine

January 12, 2020. Media Release:  BLM Land Sale at Anaconda Mine is Not in the Public Interest 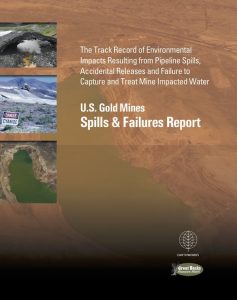 The Track Record of Environmental Impacts Resulting from Pipeline Spills, Accidental Releases and Failure to Capture and Treat Mine Impacted Water.  This report is coauthored with Earthworks.