The Thacker Pass Final Environmental Impact Statement is out with a 30 day review period ending on January 4, 2021, and BLM will accept  comments.  Please submit comments to help us ensure that community concerns are addressed at the site and that their sensitive species, habitats, water, and air are protected during the permitting of this mine.

Sample letter for comments on the project generally can be found here.

The Thacker Pass project is a proposed lithium mine by Lithium Nevada Corp., located in Humboldt County just below the Montana Mountains (photo above features the proposed site placement, with small green mounds from the company’s activity in the foreground of the Montana Mountains). Lithium Nevada Corp. has plans for open pit mining as well as processing on site. It is estimated that the project will:

The proposed project has already gone through the public scoping process, which is held by the Bureau of Land Management to gather public input on the project and help determine the scope prior to the release of the draft EIS. We are now expecting the draft EIS by the end of May.

Great Basin Resource Watch is primarily focused on ensuring accountability in the permitting of this proposed lithium mine, making sure community concerns are addressed and sensitive areas in the region are protected. The Thacker Pass proposal comes in a time of many new attempts to mine materials, such as lithium, in Nevada to support renewable energy technology. Lithium Nevada has plans to move through the permitting process quicker than is typical (known as streamlining) because of the presumed urgency of lithium required for these technologies. However, GBRW feels a commitment towards ensuring that communities’ concerns and desires are respected and that the protection of land, water, air, and ecosystems are still being prioritized, even in mining necessary for creation of “green technologies.” Thus, since Thacker Pass is in the first new wave of proposed lithium projects in Nevada and is streamlining for extraction of this green-tech material, GBRW understands the importance of monitoring the project and the precedent it is setting for how the influx of mining for these green-tech materials is done in the near future.

Beyond this, GBRW is also particularly focused on Thacker Pass for community support reasons–as it has become apparent that it is a controversial project. Some of the reasons for the controversy are discussed below in the “Main Concerns” section.  The controversy and some community concerns are also written about in our blog post from the public scoping meeting that was held in Orovada in early February 2020. If you are interested in hearing specifics, you can do so in the blog post here (following this link).

We submitted, with the Progressive Leadership Alliance of Nevada and Basin and Range Watch, scoping comments on the proposed Thacker Pass Lithium Mine. The official comments we submitted together can be accessed by selecting here.

Water and Air                                                                                              Although the 3,250 gallons per minute of groundwater that Lithium Nevada plans to pump for their operations is relatively small compared to other mines in the state (such as Long Canyon Gold Mine), it is a concern because both the Kings Valley and Quinn Valley water basins where the water will be pumped from appear to already be over-allocated. This means the amount of water granted for use in water rights is greater than the basin’s estimated ability to recharge.  People in the ranching and farming community in Orovada and Kings River Valley are very concerned that pumping caused by the mine would affect their domestic wells. In addition, potential pollution to both water and air from the processing facility needs to be thoroughly addressed. 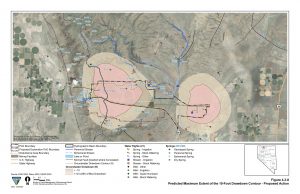 Inadequate Public Process                                                            Many people at the February public meeting in Orovada were unclear on the proposal, stated the project had changed too many times, and expressed mistrust towards Lithium Nevada. Meaningful public comment cannot occur if the project is not well understood. People also felt as though there was not enough time for making comments. Compounding this is the fact that both the company and the BLM have stated the goal of streamlining the permitting process. Lithium Nevada is quick to state how important it is to get lithium production started rapidly in order to meet expected demands–but such speed should not come at the cost of the public process. The company has done some good advanced outreach, but a hard look at the affects of this mine is still needed under law in the Environmental Impact Statement. This hard look also includes meaningful exploration of alternatives and cumulative impacts analysis.

It is important to note that there are multiple communities that will be affected by the Thacker Pass project, and that some community members desire the employment opportunities that could come with the proposed project. At the scoping meeting, tribal leadership from the Fort McDermitt Paiute and Shoshone tribe welcomed the vital employment opportunities and trainings the project would provide for their community members. Furthermore, it is encouraging to see that Lithium Nevada has hired a community liaison from the Te-Moak tribe who has described her passion and dedication for participating in a strong consultation process and providing quality opportunities for people from the Fort McDermitt Paiute and Shoshone tribe. Lithium Nevada has also talked about a job training program that would enable community members to most benefit from the employment opportunities that are brought about by Thacker Pass. If the proposed mine comes to fruition, ensuring that Lithium Nevada maintains a robust tribal consultation process and keeps their word regarding these training and job opportunities for tribal members is extremely important. 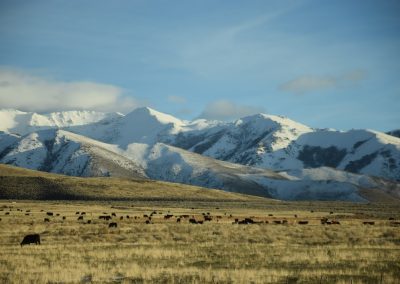 The project’s groundwater pumping could affect existing stock water wells, many of which are depended upon for ranching 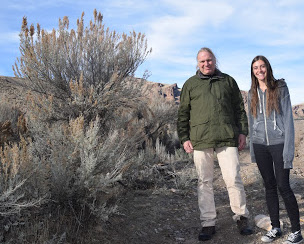 The project will remove mature sagebrush, some of which is taller than a majority of people 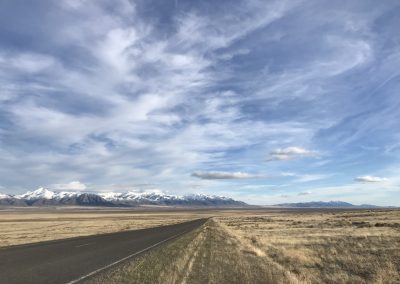 The quiet road between Orovada and Thacker Pass site could become the heart of an industrial area, reflecting the ways the project could largely change dynamics for the region and people living there

Public Process Hindered in Mine Permitting during COVID-19 Pandemic

Great Basin Resource Watch is additionally concerned about the ways the public process is currently being hindered in permitting for the Thacker Pass site–especially considering how controversial the proposed project is and the fact that the COVID-19 pandemic is impeding on the community’s ability to meet and deliberate about it. Throughout Nevada, COVID-19 has understandably made it nearly impossible for many community members to come together to discuss their concerns and perspectives, as well as share information with one another, on proposed mine projects. If people do not have the ability to come together to have these conversations and arrive at a collective understanding of a proposed mine, it is nearly impossible for a project to acquire meaningful community consent. Furthermore, accessing the technical documents needed for understanding a proposed mine project and its impacts can be difficult for people, especially in rural areas, who do not have consistent internet to locate these documents electronically and who, because of COVID, can no longer go in person to access this information. In these ways, the current pandemic has put many people and communities in positions where they cannot fairly give their consent for projects. Despite this, the permitting for many mine projects–including Thacker Pass–are continuing as usual.

Because of our deep concern about this, we sent a letter to the state director of the BLM about the ways the public process is being hindered and requesting that the process be delayed until the community members are able to meet and meaningfully deliberate about the project. The letter can be found here. If you would like to also send a letter about this, you are more than welcome to borrow any part of ours that is useful.