What is the quality of the water in pits?

The water quality can often be very poor, especially early in pit lake development.  The Lone Tree mine, only a mile from the Humboldt River, ceased pumping groundwater (dewatering) in 2006, and the pit lake has been developing rapidly.  Late in 2007 the lake acidity began to increase (pH dropping) to a point so severe that corrective action was required since it was a risk to wildlife.[i] The photo here shows the pit lake after only two and a half years of filling and early in the treatment operations.  Currently, the acidity of 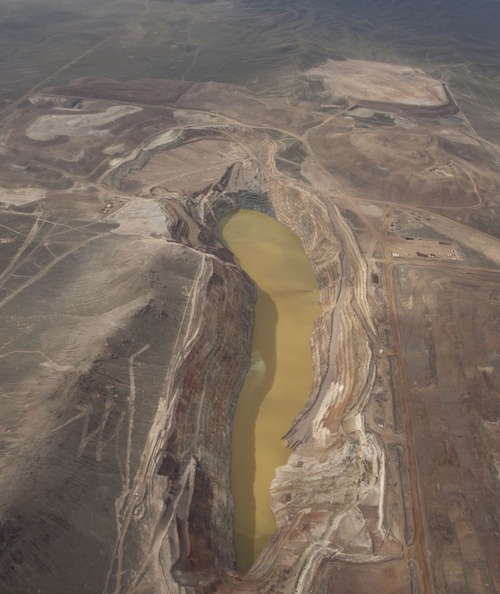 the lake has been kept in check with continual additions of lime (~39,000 tons[ii] as of the beginning of 2012), a commonly used acid neutralizing agent.  It is unknown how long lime additions will be needed.  Eventually, the Lone Tree pit lake will probably stabilize; however, the water is likely to be high in salts, which will effectively eliminate its use as drinking water, stock water or many additional municipal and industrial uses, nearly all of which were beneficial uses of the groundwater prior to its natural movement into the pit lake.

Other pit lakes in Nevada also showed very poor water quality early on, and are now no longer acidic, but high in salts.  The Sleeper pit lake is a good example, where significant treatments were done to this initially highly toxic and acidic pit lake.  The Sleeper Pit lake (Humboldt County) is no longer acidic and does support aquatic life and could serve a recreational use.  In many cases a pit lake may take 100 years or more to reach its near final level and water quality, so it is still not completely known what will be the long term water quality, although evaporation is likely to increase the concentration of the water soluble contaminants.  There are some like the Berkeley Pit in Montana where the water quality has remained poor and is now a Superfund site.  In Nevada the Yerington pit lake contains excessive selenium, which is a risk to birds.  In general, for Nevada, treatment methods using mostly lime have been effective in arresting the acidity problems and thus reducing many of the metal contaminants such as manganese, chromium, lead, and mercury.  In some cases, like the Yerington pit lake, other contaminants such as selenium, arsenic, and cadmium will continue to exist under less acidic and neutral conditions all within acceptable limits of pH.

Pit lakes become contaminated and acidic as a result of reactive minerals, typically sulfides, that are exposed to air and water as the pit fills, and the process is catalyzed by bacteria that are always present.  There are a number of methods that attempt to predict water quality at mines and in pit lakes.  These acid/base accounting methods and longer-term kinetic testing can give an indication, but seldom are they very predictive when the geochemistrty of the rock and ore is neither very reactive or unreactive.  In a 2006 study of water quality predictions in mines of western U.S. it is stated, “Of the 25 case study mines, nine (36%) have developed acid drainage on site to date. Nearly all the mines (8 of 9) that developed acid drainage either underestimated or ignored the potential for acid drainage in their EISs.”[iii] Because of the complexity of wall rock and the lack of understanding of what reactions occur when groundwater is removed, it is practically impossible to account for all of the factors in calculating future water quality in pit lakes.

In general, however, the examples of the Sleeper pit lake and the Lone Tree pit lakes indicate that once the pumps are turned off, and the pit lakes form, treatment of the resulting acidic water can result in a pit lake with near neutral water quality, and toxic contaminants reduced.  One example where this has not been the case, is the Ketchup Flat pit lake at the Paradise Peak mine (Nye County).   Nine months after Meridian Mining Company sold this mine, it went bankrupt, and the resulting pit lake tended towards acidity (pH less than 5) and the pit walls began to collapse.  This pit lake now poses not only a potential risk to wildlife, but also presents an attractive nuisance to persons who may want to hike down to the bottom, cross steep and unstable slopes to a contaminated water body.   Because of the danger of the slopes, water quality samples have not been reported to the NDEP for over 10 years.

[i] In 2008 Newmont Mining Corp received approval from NDEP to add ~1,900 tons of caustic soda (sodium hydroxide – lye).  This is the amount needed to neutralize the acid in about 2 million average car batteries.