Long Canyon Gold Mine is an operation in Elko County, in the North Pequops Range, that Great Basin Resource Watch is heavily focused on for water protection and community support reasons. The mine has been operating for four years on culturally significant land to the Confederated Tribes of the Goshute Reservation (CTGR) who have been voicing great concern over the project since prior to and throughout its operation.

Despite the CTGR’s voice (and legal actions) taken around various problematic aspects of the project, including its irreparable damage to culturally significant land, Long Canyon Mine is currently still extracting gold, and its owner, Nevada Gold Mines, has plans to expand this operation even further. The planned expansion would include a pit lake and a massive increase in groundwater pumping (between 10,000 and 45,000 gallons of groundwater per minute) that would likely dry up Johnson Springs Wetland Complex–which is home to the endemic relict dace, the source of drinking water for Wendover, and a place of cultural significance for the Confederated Tribes of the Goshute Reservation (CTGR). The image at the top of the page is an overview of the Johnson Springs Wetland Complex. Great Basin Resource Watch is expecting the expansion, called “Phase 2,” permitting to happen in 2020.

Nevada Gold Mines has applied for water permits for their massive pumping scheme required for the mine expansion. If these 31 permits are granted, it will be a significant step towards the massive dewatering that will have immense biological, social, ecological, and cultural repercussions. Due to shared concern about the repercussions of this dewatering, on April 6th, 2020, Great Basin Resource Watch (GBRW), Center for Biological Diversity (CBD), Sierra Club Toiyabe Chapter (SC), Wild Horse Education (WHE), Progressive Leadership Alliance of Nevada (PLAN), and the Pequop Conservancy, LLC filed a joint formal protest of Nevada Gold Mines’ 31 water rights applications with the Nevada Division of Water Resources.  Follow this link to see the media release about the protests. 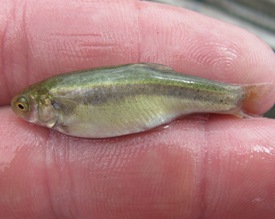 Relict Dace, photo by the U.S Fish and Wildlife Service. 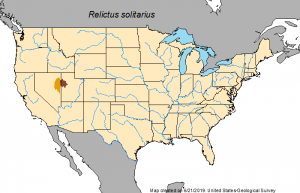 Image by the USGS. Endemic species are species that only exist in one particular place. For the Relict Dace, this dark orange color on the map (more specifically, Lakes Franklin, Gale, Waring, Steptoe and Spring basins in eastern Nevada) is its only known native range in the world.

Furthermore, the few precautionary agreements made to ideally reduce the destruction of such sites were greatly violated. One of these was the agreement that the CTGR signed with the BLM “that promised the exchange of technical documents and other culturally relevant information” during the Environmental Impact Statement development process (Declaration of Paul Echo Hawk pg. 12). Despite these terms, the CTGR was denied access to cultural resource inventories and was not given permission to have tribal monitors on the project site until after the mine’s construction had already begun. Since these inventories were taken by people unequipped for understanding or recognizing such cultural resources and sites, and because the CTGR were not given the ability to check the work of or provide directing cultural knowledge to those doing the inventorying, many cultural resources and sites in the mine’s project area were completely missed. This made the recorded impacts to cultural resources and sites highly inaccurate in the Environmental Impact Statement, as “massive numbers of cultural resources within the Project Area were missed by the mining company and their archaeological contractor” and a “gross underestimation of the cultural significance” came as a consequence (Dec. of Paul Echo Hawk). Another protection-minded agreement broken was the Memorandum of Understanding. Despite the right the memorandum gave the CTGR to “participate in major interagency meetings to discuss and review the project,….none of the CTGR’s comments on drafts of the Environmental Impact Statement or concerns from meetings with the BLM were recorded in the final EIS that was published for public viewing and comment” (Dec. of Paul Echo Hawk). In this way, the cultural significance of the land was highly disregarded, and the CTGR were denied meaningful consultation and the opportunity to interpret their own cultural resources and sites.

An expansion on a project that already has its foundation in the destruction of cultural resources and in various violations to rights of the CTGR would only cause further harm to such a culturally significant region. The expansion should also raise concern for anyone who understands the importance of the very productive springs complex, which provides for the well-being of communities uniquely relying on it in various ways.

A focus of wildlife concern has been centered around the relict dace, a fish which only exists in four valleys in the world (all of which are in northeastern Nevada, and the most substantial population of which is primarily within the JSWC).  According to a recent genetic analysis done by Dr. Mandy Finger, “every population [of relict dace] has unique genetic variation that may not be represented in other relict dace populations….Accordingly, the loss of any particular population (such as Big Springs [JSWC])… would result in the loss of that unique evolutionary lineage.” This high level of unique genetic variation displays the valley’s importance for its ability to support such immense diversity. The dace plays a crucial role in the ecosystems they live in. There is “consensus that the JSWC represents a significant and unique population of fish, and that its loss would be a loss to the overall piscine diversity of Nevada” (Donnelly). Drying up some of the only springs in which the dace lives would pose an immense threat to the species as a whole. In light of this, a petition to protect the dace under the Endangered Species act was filed in 2014. The Fish and Wildlife Service was supposed to reach a final decision on listing the fish by September 30, 2020.

Along with the relict dace, a population of springsnails with unique genetic lineage that is unreplicated at any other population exists within the JSWC and would be greatly threatened by the dewatering with the mine’s expansion. These springsnails also hold high importance for the diversity and biological richness of the valley, since “they provide an essential filtering function to the ecosystem there, as well as nutrient cycling and ultimately contribution to the composition of the substrate” (Donnelly). 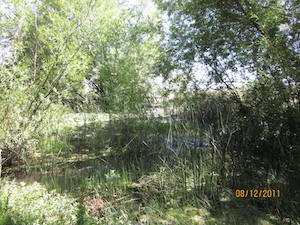 To the left is an image of Big Springs, which will become entirely dry under current mine expansion plans.  It is a part of the Johnson Springs Water Complex, which produces between 800 and 1,700 gallons per minute of clean spring water. The increase of groundwater pumping associated with the Long Canyon Mine expansion threatens the springs, which are some of the only places in the world  where the relic dace lives. The springs are also a place of cultural significance for the Goshute people and the source of drinking water for West Wendover, Nevada.

GBRW’s Further Concerns with the Project

Nevada Gold Mines company results from a recent merger between Barrick and Newmont in Nevada, making them now the most powerful mining company in the state. Therefore, all opposition to the Long Canyon Gold Mine and its expansion will have to face enormous amounts of resources from the mining company. Additionally, Barrick and Newmont do not have good track records of running environmentally and socially responsible mining operations. For example, Barrick is the owner of problematic operations such as Lone Tree Mine and Phoenix Mine.

GBRW is also concerned that the company has likely had these plans for expanding the Long Canyon operation since the beginning, but they did not include these plans in the part of the Environmental Impact Statement where they would have belonged–a way of seemingly “getting a foot in the door” and attempting to side-step environmental regulations. This is a concerning lack of transparency that is common practice to many mining operations.

Greater detail surrounding the Confederated Tribes of the Goshute Reservation’s legal action in 2015 against the Bureau of Land Management regarding Long Canyon Gold Mine can be found in the following links to these documents:

the Petition for Stay filed

the Declaration of Paul Echo Hawk

the Notice of Appeal and Statement of Reasons filed