Trip To Carlin Mine Trend, Reflection

Trip To Carlin Mine Trend, Reflection

The roads got smaller and smaller, and slower too—to the point where they started to feel almost like a secret—as we made our way from Elko towards the Carlin Trend complex of mines. When it became solely the mine road left, with dirt piled on both sides of the narrow path and a giant sign in red at the entrance yelling, “Entering Barrick Property, DANGER, ACTIVE MINING AREA,” it was as if we had entered a whole other world. We started passing countless white trucks and vans with red little flags flying from the tops of them, similar to the ones I remember waving as tall as my little arms could muster from the back of my grandpa’s boat when my sister would fall off of the water tube. My heart would pound with that red flag gripped tightly in my hand—as other boats raced by and as I sometimes imagined catastrophe—until her wet arms grabbed on to mine. John explained that the red flagged trucks were filled with employees likely changing shifts, flags required for safety around such large mining equipment, and he chuckled that they were probably speculating towards our little green Subaru, “oh no, those poor people are so lost.” The road winded and extended further and further than I ever imagined it would, with different hazard signs becoming more frequent, and vehicles more foreign. The wheel of one mine truck more than doubled the height of our car. I suddenly felt very small, and so breakable. And I thought back to my friend’s fear and fascination with the deep ocean. She would wide eye exclaim how huge and spectacular and scary its creatures were. And how unknown to us, too. I couldn’t help but feel a resemblance to the mine complex: the machinery whose names I didn’t know, had never seen before, and were much larger than me, and to the bright lights on top of almost every vehicle enabling them to work throughout the dark. The 24/7 operation of decades, run by hundreds of workers, so small and so fragile to the equipment they were running. A whole other world seen by so few others who are not a working part of it. A place not even fractionally understood by the majority of us who depend upon it. The deep ocean in the desert. 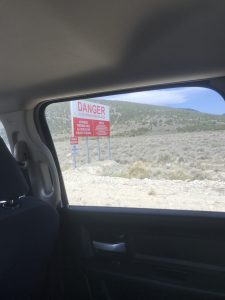 My thoughts are interrupted to note with John that the air even smells different here. As the hot wind rushes in through the car windows, he asks, “oh, what does it smell like to you?” I can’t pinpoint it. He continues after many more breaths, “does it smell like almonds?” Shocked by the accuracy, I exclaim, “oh my gosh, yes! Exactly!” My excitement quickly turns to horror, though, as he explained in his knowing, chemistry teacher, half smile that cyanide smells like almonds. I look closely to the left of the road, where a heap leach pad is spraying a smashed pile of earth with cyanide to extract micro fragments of gold. I feel a rush of panic, an over-alert-ness of my breaths. Fear is not even the best word. It is more like suddenly feeling fragile, breakable, vulnerable. It was like noticing, all at once, every detail of existing within a body. I was suddenly overly-aware of that thin layer of wet film covering my eyes….and thought, how strong is that film? And how thin? It became almost a tiny bit wetter then, or maybe I just became more aware of its wetness in feeling so suddenly exposed. In understanding where I met with the air, the air that smells like almonds.

I then think of what it must feel like to work there. I think of all the hazard signs, all of the structures of the mining operation designed around its inherent danger. And I think also about my psychology professor who told me once that our emotions are a way of providing us with information that we need to survive. And I thought, if being around the materials as they become these materials makes us feel this way, what does that say about the things we are building?

I don’t write this because I think extraction is inherently wrong. How could I? I do things like extracting oxygen from the air with my lungs. And how does that feel? Most of the time, it doesn’t feel like anything at all…just a result of the part of my brain that takes care of everyday essential functions without my needing to consciously think about them. My breaths exist as part of the intricate, not fully understood, process of my body instinctively caring for me, for my continuation. A part of our innate, ever present, compulsion towards life. My brain stem asking my lungs to hold air and my mouth to breathe it in, without my thinking about it, so that with those breaths, I have the ability to cry at my friend’s pain, feel anger towards brokenness, or laugh with my sister. But on the crystal clear morning, or in the mountains after rain has greeted the sage, extracting oxygen from the air with my lungs feels a bit like being free.

Driving home from the Carlin Trend, John explains how cyanide functions as a poison. Cyanide hooks onto your blood because it’s the same shape as oxygen molecules. In this way, cyanide tricks your body so that it can no longer uptake the actual oxygen that it needs to survive. Ultimately, that is how you die by cyanide–and how it’s possible to suffocate even with oxygen in the air.

As I am picturing and sympathizing with blood cells being silently deceived into death, I remember Mister Bailey recounting a story about pig weed to us a few days ago. The farming family had lost a great deal of their cattle a few years back to the poisonous weed. He held a piece of the plant in his hand and explained how it is poisonous when ingested but how their cows typically stay away from the weed that they know will kill them. The year the ranching family had lost a great deal of their cattle, they tested for the reason. The results came back saying there were elevated levels of nitrogen found in the cows, indicating pig weed as the cause of death. The Baileys didn’t believe this, as they knew their cows to stay away from the weed while grazing. With further investigation, it turned out that pig weed had been used in some of the processed feed the Bailey’s bought, in such small quantities and shredded and mixed so that the cattle no longer recognized it. 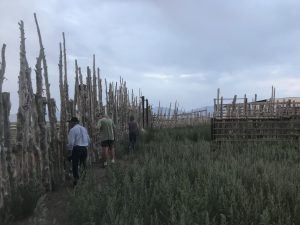 I think we’re quite a bit like the Bailey’s cattle. The cows know what they need to survive. As innate and un-thought-of as their first breath. It’s when it is crushed up, processed, transformed into something with resemblance of need but is not need itself, that the danger starts. That is where death creeps in. That is where we are less capable of hearing our bodies’ soft continuous murmuring of what is needed for supporting life. The innate knowledge of what we require and what is required of us.

When we talk about righting our relationship with nature, about ecological collapse, about the impact or the survival of our human species, the solution is complex but still simple. It’s not a war against nature. Or a war against ourselves. It’s the trickle of oxygen in our bloodstream, the way clean air feels on our breath. We are stuck in the wheels of the machine, and yes, truthfully, sadly, we’ve built the machine…but it’s not our nature to collapse in it.

Previously during the trip, one of our board members explained in a quiet, steady voice, “LAWS,” which stands for “land,” “air,” “water,” and “spirit” …and how, “if any of those are gone, we die.” At the end of the day, we are dictated by it. Our bodies know this truth, and always have. And despite whatever it is that we are building, our bodies keep pulling us back towards this ancient mandate. I think as long as we exist, they will always try to do so.

A few hours earlier, John, this same board member, and I went to Lamoille Canyon to eat lunch. My soul still feels the way the canyon covered us in Aspen, dragonflies, wildflowers, sunlight, cold flowing glacial water, and the laughter of barefoot children. I close my eyes and can again see the diversity of life teeming around us. And I have a feeling that there’s still the possibility that we will be alright…or at least in some sense, that life will be. And we will be too, if we listen to our own gentle, ever present, compulsion towards life. To continue. We know what we need to continue. 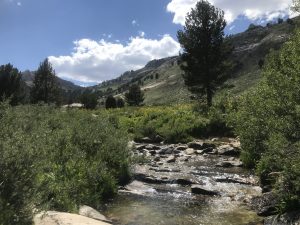