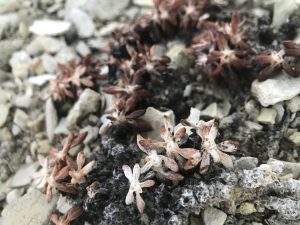 This trip was incredibly valuable and gave me so much more perspective on mining justice, especially in the way it has made me re-examine and internalize what it means to join the fight for social-environmental justice around extraction.

Being able to share, for a short time, the same space as Tiehm’s Buckwheat with Jackie, Beverly, and Ian was an incredibly impactful moment that I think I will always carry with me. Until that moment, activism and organizing around mining injustice seemed to stem from a place of outrage or pain around the destruction and harm encompassed by extraction. And as moving as it is to see somewhere like the Anaconda or Silver Peak Lithium mine, it was even more moving to be somewhere as whole as that moment in Rhyolite Ridge felt.

Standing next to the Tiehm’s Buckwheat that exists on only 10 square acres in the world, I felt awe and wonder and indescribable joy in the inherent worth of all that was around me. That of all the places those flowers could have grown, they’re growing right there. And only there. The exact soil, the way it lined those particular mountains, the way they interacted with that particular air and every other creature that came near them…now including the four of us. I was expecting, when we found Tiehm’s Buckwheat, to feel their fragileness—the precariousness of existing only there, only like that. But instead, when I looked at those flowers, I saw how those 10 acre feet are their entire world, and I felt deep down how simply beautiful and miraculous it is that they exist. And I thought of just how beautiful of a world it is in which our worlds can collide. I could have only previously understood them, in their precarious situation, as weak because I had forgotten that resilience comes from many different places, and mostly where you least expect it. Here and right now, their fragile world means something immensely to us, not because we have chosen it to, but because those flowers intrinsically matter to our own being. That we’re existing here, right now, together. That this matters because, deep down, diversity is the essence of what makes us beautiful. It left me with a deep desire to preserve this moment in time and space that we have done absolutely nothing to deserve. From here, it feels like a true gift to be able to fight for another, and that this fight for another includes ourselves and the wholeness of the world in which we live. I want to tell everyone I meet about those Buckwheat and the Rhyolite Ridge project, because every single last one of those flowers is a gift, and every single one is worthy of fighting to the ends of the world for. I know that the world, myself included, would feel a little less whole if they did not exist.

Seeing those buckwheat, I also felt something new about resilience. I recognized the three beautiful people around me who care about those 6 populations of buckwheat, the people in the Owens Valley Indian Water Commission the next day who care about the buckwheat, and all the people who have never seen these flowers yet still know their worth. Compassion is not something I have observed the extraction industry (and the capitalistic system holding it) to have, but this also gives me new hope for the fight against Rhyolite Ridge and the shared fight for all those harmed by extraction everywhere because I felt a sliver of the immense power compassion has.

Before seeing Tiehm’s buckwheat, we visited Nevada’s already established lithium mine named Silver Peak. On the side of the road, shortly before we made the turn off to the Silver Peak Lithium Mine, Beverly handed Jackie and myself two rocks, one for each of us. After we examined their beauty and Beverly allowed us to better understand them together, she said, “I think you two should keep them” as a reminder of continuing the fight against this mining. Thirty minutes later in the car, after we left the lifeless soil of Silver Peak mine—where even the rocks have turned into something alien—she said, “I think you two saved a couple of rocks today.”

As I write this reflection, with the rock next to me in my bag, I know that all my future work on mining justice is helping to fight for a wholeness the world has, for the beauty lying within communities as they exist and have long existed, and for the magic it is to be on the planet with them during this present moment. I have a new feeling of activism forming itself somewhere more permanently inside me, not in anger. It is an activism that says I recognize that magic. It is an activism coming from sharing together with those around me, with action, recognition of all that intrinsic worth. As much as I am scared of how immensely much could become lost around us through mining, I somehow also have this feeling that it will be alright. Because the buckwheat is here. You’re here. I’m here. And that’s not an accident. And perhaps activism stems from saying, I recognize this, and I’m going to start walking, next to you, now. I’m going to start living to my very best with this recognition.