Where Is It Happening?

The map below shows areas that have been open for oil and gas leasing from 2011 through June 2016.    The five wells that have been fracked for exploration purposes are on private land. Source: U.S. Dept. of Interior, Bureau of Land Management. http://www.blm.gov/nv/st/en/prog/minerals/leasable_minerals/oil___gas/oil_and_gas_leasing.html High Resolution Version of the map 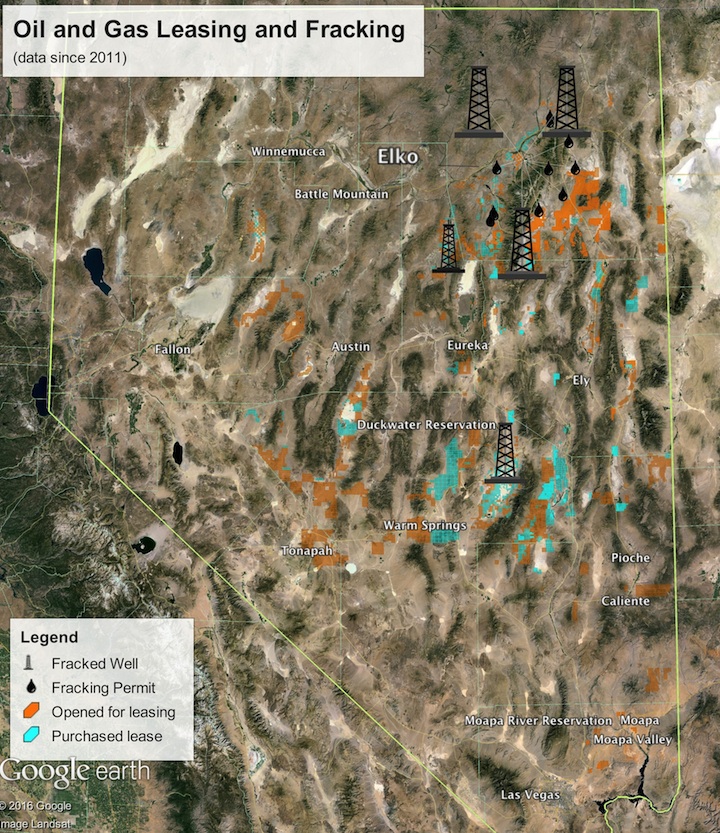 Ultimately the amount of water that will ultimately be used by oil and gas activities on leased lands is unknown; however, the five exploratory fracking events from 2014 used a total of about 1.13 million gallons of water (~3.48 acre feet).  The Huntington Valley Exploration Project (20 wells proposed) in Elko County Nevada was is expected to use 7.5 million gallons (29.3 acre-feet, AF) in the first year and about 72 million gallons (220 AF) in the second wear.  This amount of water is significant relative to other users, such as ranchers and growers, in the area.  This would be only the exploration stage.  Development of wells for production using fracking methods will use an additional 5-10 million gallons of water per well.  The Huntington Valley Project is entirely on private land. 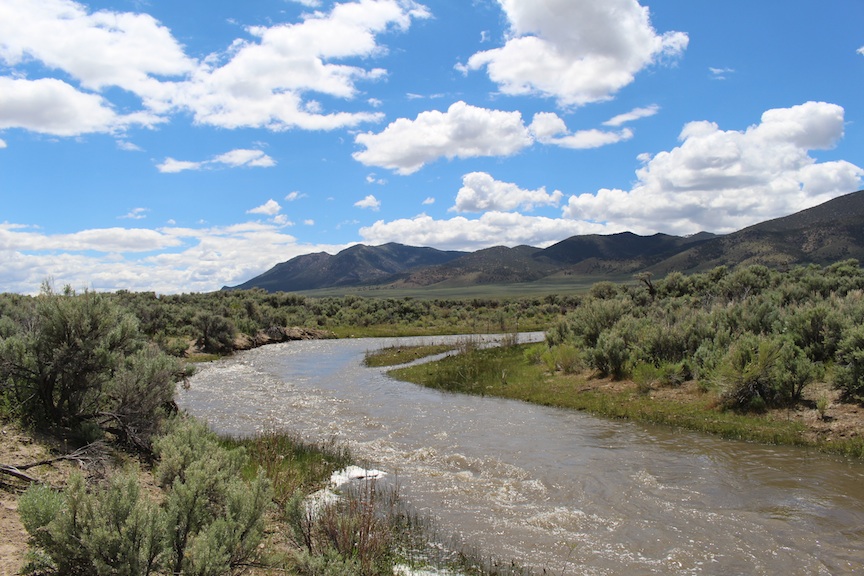 A well field of 100 wells, which is possible, would use five times the water as the Huntington Valley project.  Nevada is the driest state in the union and often under drought conditions. We don’t have water to spare on a process that will impact the land and communities and may be not even yield oil and gas.

Reese River Valley, spring 2016.   This is one of the areas that has been opened to oil and gas leasing and potentially fracking.  Currently these public and private lands are used by ranchers, farmers, and outdoor recreation. Photo: Juan Chorro

Nevada Regulations are Not Adequate

The BLM offered lands for lease fully knowing that Nevada had yet to develop regulations for the use of hydraulic fracturing andenvironmental protections.  This past fall Nevada approved inadequate regulations specific to modern hydraulic fracturing.  For example, groundwater monitoring is not specifically required around exploration/production wells that are designed and placed to intercept potential contamination from a well failure. The proposed regulations only call for sampling of “available sources” which

are existing fresh water wells including the water production wells to be used in oil and gas exploration/development.  There is no guarantee that the wells for groundwater sampling will capture a contamination plume until it reaches drinking water wells and then too late. In addition, the proposed sampling during production is only after 60 months instead of the periodic monitoring requirement of hard rock mining operations.

The public notification and engagement process is quite sparse.  Permit are required to drill an oil or gas well with additional requirement for fracking.  However, the permit process is between the permittee and handled internally by the Division of Minerals.   There is no general notification to community members regarding permits, and only a 14 day notification to the nearest residents that fracking is to occur.  In general, by the time the public learns that fracking is to occur in their area it is essentially too late to contest or at least request a hearing.

Oil and gas companies are required to post a minimum of $10,000 bond for each well up to a minimum of $50,000 for all well by one owner.  This will not cover cleanup of possible catastrophic cleanup for a fracking operation if the company declares bankruptcy.  Additional financial assurances are needed to protect Nevadans from flipping the bill.

Federal law (National Environmental Policy Act) requires an environmental analysis of the impacts of leasing lands for oil and gas exploration. BLM has conducted environmental assessments that have been incomplete and violate federal law.   These lease sales are “significant actions” by the federal government, since it is likely (“foreseeable”) that oil and gas development will occur following exploration, which will have large impacts on the environment and nearby communities as well as the state of Nevada as a whole.  This means that BLM should be conducting full environmental impact statements (EIS) on these sales to properly address the potential impacts from the sale.   As part of the EIS process the BLM should conduct scoping public hearings on the actions so all would be informed and could comment at that time, then issue a draft analysis with public meetings for comment again.

An important aspect of the analysis whether an EIS or an environmental assessment is to analyze for cumulative impacts which include the combined impacts of all existing and foreseeable projects.  It is foreseeable that oil and gas production will occur using fracking methods.  In fact, it is because of the development of modern fracking techniques with horizontal drilling that the oil and gas industry is interested in Nevada, so for BLM to minimize or ignore the impacts of this foreseeable actions is illegal.

Renewables Instead of Oil and Gas 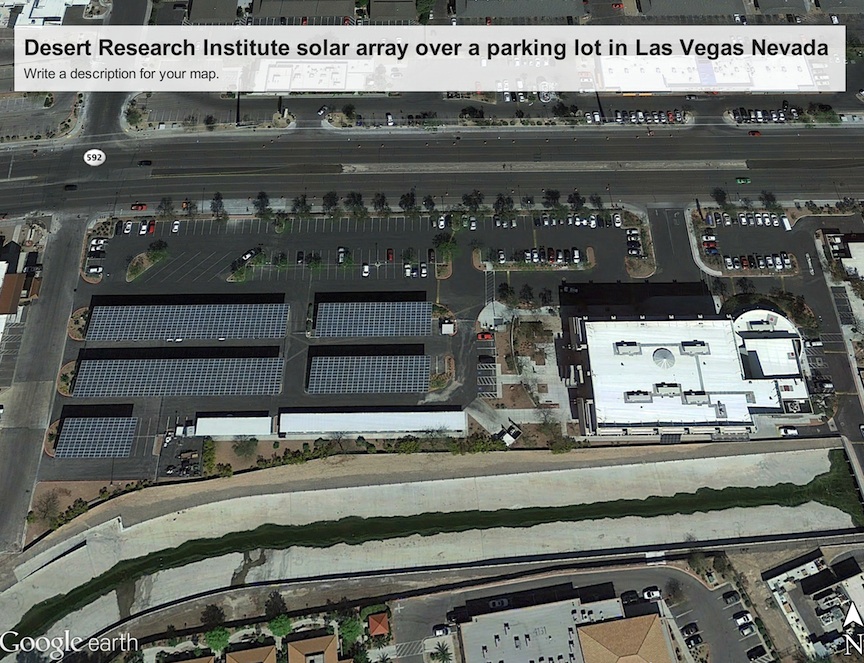 It has been stated by the American Petroleum Institute (lobbying arm for oil and gas industry) that the challenging of these lease sales is interfering with an energy boom in Nevada.   Nevada’s energy boom is in renewable energy that will have few of the negative impacts that comes with oil and gas production.  First, we can deploy solar collectors in our urban and “brownfield spaces” (already developed lands) so we do not need to change our striking Nevada landscape.   Second, there is not the laundry list of toxic chemicals as used in oil and gas production.  Third, Nevada is abundant in renewable energy capacity, which will translate into energy independence and many long-term and well paying jobs.  Fourth, renewable energy production is not only cleaner, but is a long-term hedge on climate change.  For example, the under-development Barnett Shale field in Texas will impact about 6,500 square miles and is expected to produce about 43.37 trillion cubic feet of gas in total.  The energy content of that amount of gas would be produced by 3,000 square miles of solar collectors in Nevada over a period of twenty years. Most solar arrays have a lifetime of 15 to 20 years.  So, here in Nevada we can produce the equivalent of the Barnett shale fields using half the area (which can be over parking lots as in the Google Earth image above) over the same time period.

What the American Petroleum Institute is really saying is why are you Nevadans standing in the way of our profits boom!!